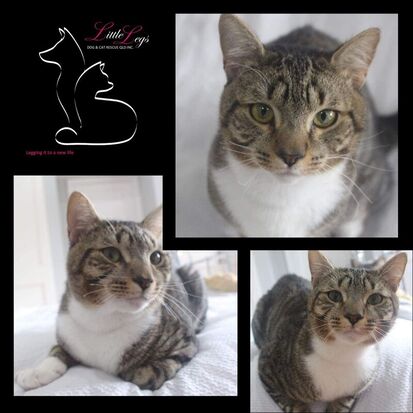 Jetstar is a sweet boy that came into care after being dumped with his buddy Qantas after being saved by a good samaritan.

He has singed whiskers and fur from an unknown source or reason. It does not seem to have affected him. He is a bit of attention hog. He will push in front of Qantas for attention and food. It will be something you will need to be aware of if you adopt both, then Qantas doesn't miss out on either.

​He is a loving boy who will fit into any type of family. Although he came into care with Qantas, he spends time sleeping in his own space, so may settle into a home without his buddy. Would be better to adopt together but feel he could be fine on his own too. May just take time to get use to being on his own.
​
MEDICAL NOTES : Nil known
BEHAVIOURAL NOTES : Nil known


* All Little Legs cats & kittens are desexed, microchipped & vaccinated prior to adoption *