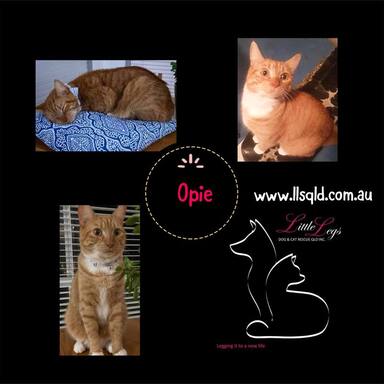 Opie is an affectionate cat, he loves being around people he will come up for a pat and sleeps on the end of our bed when he is not in his cat cave.

He loves to see our fish tank and is quite interested in the fish moving, and playing with his laser on the floor walls. He is not fussed by stuffed toys but like when things/toys move.

He is often found on the cat hammock in the sun or sleeping in his cat cave. Or in a cardboard box if it’s left out for him.

He can be vocal mostly when he is hungry or looking for people in the house, he will often come and meow ‘hello’ when you come home. He does meow when we are outside and he is inside and can see us. I think he wants to be with his humans.

He would make a awesome pet for a couple or great company for a single person. More suitable to a family with older children, who understand cats who can’t be forced to have pats or play.


* All Little Legs cats & kittens are desexed, microchipped & vaccinated prior to adoption *