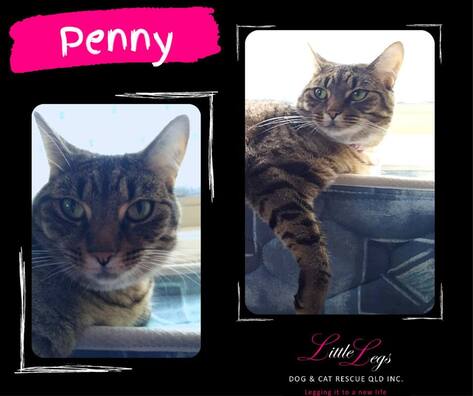 Penny is a lovely laidback kitty who enjoys laying around and watching the birds fly by the window. she loves pats, with the purr motor starting immediately, but not so fussed on cuddles...she likes her independence. She would probably enjoy being an only cat, as her foster brother encourages play, I think more than she'd like - but they generally get along well, so having a kitty friend may not be so bad. Penny is a little more hesitant with males than females, but enjoys being around children, and is tolerant of dogs that are tolerant of her. Penny seems to be happier around myself and my daughters (3 & 5 years) than my husband, although, with some direct engagement daily is starting to be content to not run when he comes in the room.