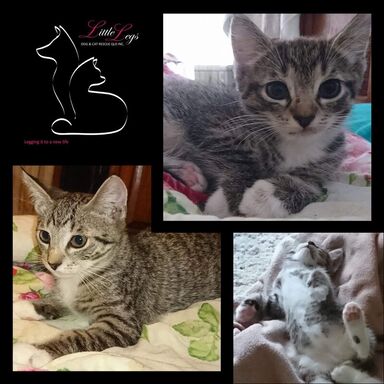 Quagi is a shy little tabby man, who was born at his foster carer's house in October.

His mum, Esperance, who was only a baby herself, delivered four healthy babies shortly after coming into care. Quagi and his brother, Kennedy, and sisters, Wylie and Mylie, are now independent of their mum, and are getting ready to find forever homes of their own.

​He loves to play with his brother and sisters, as well as the other fur-kids in the house. He is a quiet little boy, who may take time to learn to trust his humans, so he is looking for a forever family to give him time to find his feet, as well as lots of love and attention.
​
MEDICAL NOTES : Quagi has previously been exposed to Ringworm but has been given the all-clear by his vet Quagi experienced a sensitivity reaction to general anaesthetic during desex surgery and may take longer than average to recover from a GA in the future.
​BEHAVIOURAL NOTES : nil known