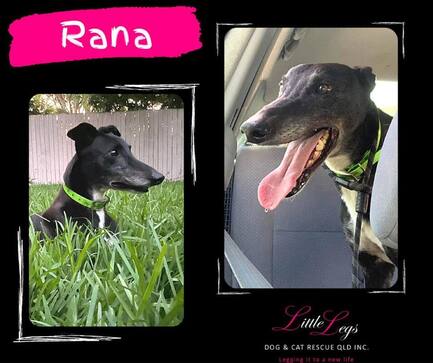 Rana is one of the most gentle, kind, calm and loving dogs you'll ever meet. He can be a bit shy at first but once he gets to know you, you'll start to see this goof come out of his shell. Crossed between a cat and a horse, he is mostly a couch potato who loves company. He loves a sleep-in in the mornings. Once he's up, he likes to do 'zoomies' in our front yard. Rana is gentle on the lead and happy to walk at any pace you set. Rana would love a home where he's the centre of attention. He may also be comfortable with an older calmer dog or cats. Being an ex-racing greyhound, Rana loves routine. He's comfortable being on his own but prefers to snuggle up when the option is available. Rana is suitable to be an apartment dog as long as he can be taken out a few time a day to do his business.

If you're unfamiliar with greyhounds, there are certain things you must consider when having them as pets: - They have sensitive stomachs and hence require slow feeders - They are sensitive to loud noises and people yelling at them. - They can take some time to get use to affection as they have not had a lot of it in their lives. - They are a sight hound and must be kept on leash at all times when out in public. - They are unfamiliar with many things (including stairs, mirrors or glass doors) and can get scared, confused or anxious easily. Socialise them slowly with lots of positive reinforcement. - They love a sprint

OTHER NOTES: Rana was recently Desexed and has not been officially green collared yet. He is allowed in public areas as long as he is muzzled. We would recommend that his new owner enquires about getting him green collared officially.
​
MEDICAL NOTES : Sensitive stomach Sensitive skin
BEHAVIOURAL NOTES : nil known