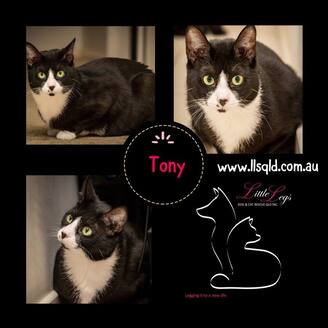 Tony (Stark) from our Avengers litter lives up to his Iron Man alter ego, he even has the mask ready to go. Found on the streets with his brothers as kittens he had unfortunately caught a few bugs and had to go into an Infinity War to fight them all. This required isolation while he was still young while he fought them in a galaxy of his own. His perseverance came through though and he won the battle.

This little guy has been through a lot but it has not affected his personality. Since being allowed out of isolation he has been making up for lost kitten time as he loves playing with his toys or his foster brother. He also loves humans and will follow his foster mum around the house. His best time of day though is whenever she sits down when he always arrives for a cuddle as a lap is the best place to be. At night he will curl up next to you in bed or even sometimes sleep on your head! He has been introduced to children and loved the attention.

The long period with infections left Tony with irritable bowel. This is now entirely controlled with food as he has had no issues for a few months and this is allowing his digestive system to build up strength. We cannot say whether he will be able to eat normal food in time or if he will continue to need this diet.

This is a guy with a gorgeous, cheeky and smoochy personality. He makes his foster mum smile everyday with his antics but also has so much love to give. He can be shy at first but once he trusts you this guy will be a pleasure to have around.